I was forwarded an e-mail two days ago about a Rottweiler that bit the face of a child:

LOUISVILLE (WAVE) -- A young Louisville girl was rushed to the hospital Wednesday after being attacked by a Rottweiler she was trying to pet. It happened in the 100 block of Saunders Court in west Louisville just after 7:30 p.m. WAVE 3's Connie Leonard reports.

A woman tells WAVE 3 she was getting ready to take her mother-in-law's dog for a walk. She says the dog was in her yard when some neighborhood children came up and asked to pet the dog. That's when the Rottweiler named Jo-Jo attacked the 6-year-old girl.

The girl was rushed to Kosair Children's Hospital. A few minutes later, police and animal control officers arrived at the house to take the dog away.

"She was petting him," said Shannon Stevenson, the daughter-in-law of Jo-Jo's owner.  "She leaned in to him to give him a hug or a kiss and he went to grab at her, and when he did I grabbed him to hold him back. He was coming up aggressively. I put my arm in front of him. When I did, he got my arm."

According to Stevenson, the girl suffered wounds to the side of her face. She remained in fair condition Thursday morning.

Stevenson said the dog hasn't been socialized and is usually kept alone in the yard on a chain. Metro Animal Control officers say the dog will be quarantined for 10 days while officials investigate.

Jackie Gulbe with Louisville Metro Animal Services tells WAVE 3 that it is illegal to keep a dog on a chain in Louisville.

This saddens me quite extensively. As a former breeder of Rottweilers, I have to ask how can it be that our cherished dogs who serve us, protect us, or aid us in any way get to the point where they harm one of our most precious and innocent legacies: OUR CHILDREN?!!

When are we going to get a grip? 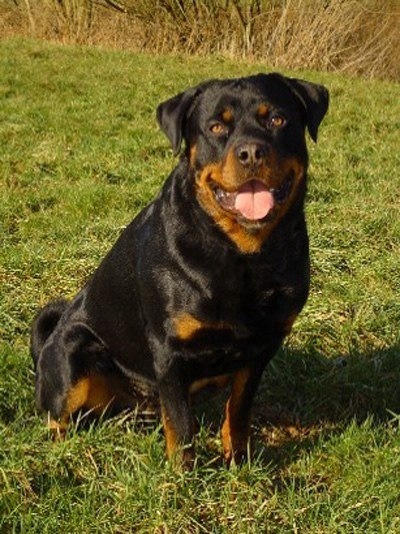 In many cases, the dog is blamed, case closed. I have attended court as a behavior representative in many child or human bite cases. The courts themselves in all essence do not allow us to analyze and reason (which is very difficult) when a child is hurt.

Years ago I attended a case where a German Shepherd disfigured a 4-year-old child. The owner of the dog blamed the parent, the parent blamed the dog and the judge ordered the dog euthanized. I spent two days in that courtroom and it was a free for all; dog and owner lynching. People lynched the dog and the owner fined, but it didn't change the fact that the child was attacked and traumatized from the event, did it? There was no analytical understanding in order to prevent it from happening again.

Unfortunately this is quite the common result in most court cases; a convenient way of getting rid of a direct problem in the end, while a week later another dog and another child suffer with their lives based on our failed understandings of both. How tragic.

So, Who is at fault?

Well, the responsible parties are:

People assume dogs are far more tolerant than we could possibly be. Another reason is our precious fido is so lovable that everybody else should love him/her, or fido should love everybody equally. What a sad, pathetic, completely unrealistic way of thinking. So lets analyze this one.

How Could This Have Been Prevented?

If we look at this article, I need to ask, “was the dog trained?” As I said in my
House Pet Expectation Syndrome blog, I highly doubt it. One reason, the dog was chained in the back yard. In my books, a chained dog is a tormented animal (this differs from the temporary tie out exercise that I teach), as it is spending the whole day pacing with this heavy thing tied to its neck. If I was that dog and as I paced I would get a constant tug on my neck... boy, that would frustrate me as well.

A proper containment kennel in a strategic spot on the property would be far better (of course, one would have to work the dog before kenneling it, much like the proper use of a crate.) When the dog is young, he gets excited and jerks quite extensively when tied to a chain or dog house, adding to the relation of the stimuli passing (in this case, the neighborhood children) as being the route of its frustration. The dog does not associate the discomfort to the chain....the dog associates the unpleasant jerking when the child passes therefore associating the discomfort with the child.

Secondly the dog was in his yard. As we all know, dogs who spend time in a yard and don't have good leadership -  regardless of breed - are territorial. This is a false sense of needing to protect. Just those two pieces would have caused it to be flagged as a bomb waiting to go off. The next step would be the handler. Did the dog trust the handler? I doubt it, since the dog did not belong to the handler. However, the dog did accept a pat on the head from the child at first.

We expect our dogs to accept strangers invading their space on a consistent basis, yet we ourselves would not be comfortable if the same were done to us.

I would like someone to take themselves into an environment of tension and have someone come up that you don't know and give you a pat on the head. I know I would find that as an incredible invasion of my space and rather insulting. Yet we expect our dogs to accept this quite frequently, and they don't get any time to absorb things. We just invade their space. I guess our dogs need to be superior to our own tolerance in the same scenario.

The owner of this dog should not own a dog, period, and there are many owners like this. I don't find ignorance in dog behavior and dog management innocent. I find it negligent.

We must take the responsibility, regardless of cost, to understand the chosen breed we have and work towards making it safe for the public. Anything less is gross misconduct.

Now lets look at the child. In essence, the child did ask for permission to pet the dog. On the other note, the child hugged the dog. To a dog, anybody it doesn't know who hugs it is more than likely to get hurt. The ones that aren’t trained yet seem to tolerate it, I call the interaction lucky and leaving it to chance. When it comes to a hug or a kiss, a dog sees this as a dominant move on the strangers part and that is a threat, regardless whether it is a child or not. This mistake falls on the parents.

My own children don't run up to dogs and pet them. They seek me out and ask me if they can ask a person to pet their dog. Set aside the fact that I am a trainer, as a responsible parent I would take the time to read and understand dog behavior, whether I own one or not, because dogs are everywhere and they all have teeth!

Parents should take the time to read and understand dog behavior, whether they own a dog or not, and impart this knowledge to their children.

I would go for a walk in my neighborhood and look at dogs and their owners when they are on their property and while they are being walked. Are they out of control or nervous? Is their hair raised when people pass? Just by observing and learning tells me to keep my child safe from certain neighborhood dogs, and I would work with my child and teach them to stay away from those dogs (as well as other misbehaved or untrained dogs in general.) That would be my responsibility.

My own children are taught bite prevention, most importantly to never touch a dog even if the owner says it is o.k. They are only allowed to pet a dog unless I say they can. I am very strict about this. We take the time to teach our children about traffic safety, well, dogs nowadays are as common as cars in our society. A child should go to their parent to hold their hand to cross the street, the same level of attention is needed when encountering dogs in today’s society.

Sorry to sound rather abrupt or very sharp about this issue. In this scenario, two things that I hold dear are children and dogs, and they are the innocents. When do we get a grip and instead of reacting, take the time to become well informed? As I say it again, there is no excuse for this incident and let’s protect both!

Everybody, lets all work together - dog owners, parents, animal control officers, judges, politicians, and police officers - to protect our most precious assets. When it comes to our children and our dogs, the responsibility falls on us.

It takes 5 minutes of ignorance to cause harm. It will take a lifetime to heal those wounds.