“I have 2 Boston Terriers, 1 male and 1 female - littermates born on May 15 so they are 7 months old. They were spayed and neutered just before they turned 6 mos. We also have a 12-year-old German Shorthair Pointer. We lost our 1st Boston a little over a year ago.

Everything had been going great until 2 weeks ago when our male Boston started attacking our older dog. It has happened a few times now without any warning. He shows no signs of backing down or stopping when it happens.

After the first occurrence, we called the trainer that we had used for puppy class. She suggested that he no longer be allowed on the furniture just the older one. This is because he seems to be territorial in nature over us and the furniture.

I guess I am looking for some advice as I do not want to have to surrender him. He is good with his littermate and is good with the older dog until we all settle down in the living room at night and all the older dog has to do is walk in - but only in the evenings. My husband does pick him up and puts him in a time out as soon as he can get him.

Is this normal behavior for a Boston? Or should I be concerned? Any suggestions or advice would be greatly appreciated.” 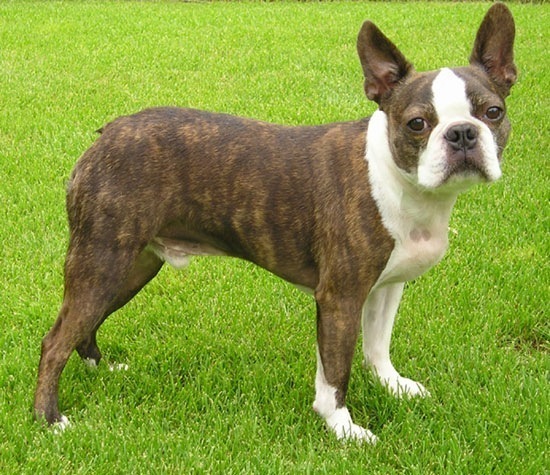 Sorry to hear about your dilemma. What you have going on is the subject of many emails I receive, therefore it makes an excellent blog post and could possibly help other readers.

To give you a bit of insight into your situation, you have what I call primitive pack mentality. It basically means your dogs have been governing themselves from day one and are now governing themselves in the natural process of a weakening older dog who is no longer wanted by the pack and cannot hold his position of the dominant.

Understanding Pack Dynamics & Your Contribution to them

The younger male is looking to climb the ranks. In the wild these animals would not conduct themselves in that manner because they need each other (most wolves take care of their elderly.) However, in the domestic, ungoverned world dogs tend to bully, play hard, growl or give dirty looks, especially to pups when they are growing up. They don't need or sometimes don’t want each other around.

This breeds the same teaching to the younger pups and then when they grow up, they don't act any different emotionally other than upping the anti in order to establish dominance. This is also seen with abused children becoming worse abusers when they grow up.

If I had to guess, I would say your Pointer may have pinned the pup, growled, corrected or possessed toys over both pups when they were young. At that stage in his development, your Boston Terrier male did not have the strength to fight back or maintain his position and then re-directed it to his sister in rough play. He has gained strength through practicing, and now he is finally giving his weakening tormentor (the Pointer) his “just deserts.” Now your young male - as well as the others - know that they can do this in your presence. The subtle daily rituals have been building up for quite some time. The end result is the aggression the young male is demonstrating.

Treat your dogs as equals

As for the advice of your trainer, I find it to be a very poor reference to solving your problem. I have heard of this practice many times and it always ends with disastrous results. Your young male sees that your older, weak dog is being favored. Because alphas are presented with offerings and affection by the subordinates, this creates the illusion (for the younger two) that your older dog is dominant since you cater to him. This aggravated your younger dogs’ need to throw the older dog off his throne. This conduct or advice has also caused you to lose your leadership stature as well, and why dog trainers pass along physical dominance as a solution is beyond me.  (Read my blog titled Dog Kills New Puppy.)

I do not allow my dogs to form a sort-it-out-on-your-own dog pack in my home. I have children and the vet bills are too expensive. Let’s not forget the life-long mental damage that the dogs suffer from, whether it be aggression or fearful anxiety. Very seldom do the dogs live a complete life of confident, stress-free happiness.

None of my older dogs are with the younger ones and the strong ones do not see me favoring an old dog in their presence. It is unfair that an older dog not be allowed to retire and live his golden years in peace. They really don't want to be around other dogs unless they are of similar age and nor should they have a need to keep up physically or mentally with them. (Note: The age-old concept of getting a young pup before your older dog passes away so “it can raise it” is absurd. Would you want to raise a toddler when you are in your 80’s? Chances are you wouldn’t have the strength or patience.)

With the two Boston's, have they ever had individual training and quiet time without the other present? If not, do you realize that technically your two Bostons have never been weaned? And if this is the case, how do you expect them to behave? They definitely are not capable of living in the human world without the dog world conflict. Moreover, have these pups been able to fit in the human world by standing alone and being supported as opposed to competing for affection and toys without direction?

Finally be prepared that there is no instant cure; you and your husband will need to re-establish all of your dogs’ trust first before they are willing to have you guide them through the cure to their troubles. After all, when a dog suffers from fear or aggression then their learning abilities and mental retention is severely retarded (this will be a process onto itself.)

The cause/effect cure: do we have the strength to look at ourselves and unconditionally help those we have harmed?

Get your Dog out of Survival Mode

As for you not opting to surrender your Boston, I have been working in the world of rescue for many years now. There are very few that are skilled enough to solve your dog’s problem. In fact, his prognosis for adoption is slim and that usually ends up with the sweet dream fluid, if you get my drift. In aggression, we tend to vent or focus on the angered one as the problem (a very cowardly train of thought in today’s mandated society.) It is the reverse; it is us who provoke it and very seldom take the time or the understanding on how to reach a resolution to the argument, or even want to look at ourselves as the cause. With this failure, the aggression increases and the cycle keeps repeating itself.

To answer the question if this aggression is a breed-specific issue, no it isn't. Your male is in survival mode and Bostons are determined, tenacious and confident creatures. I owned 2 of them. Get him out of survival mode and he will be a loyal, trustworthy and courageously faithful companion. It is absolutely possible.

True integrity is to confront matters without fear, resentment, or false shelter. Reaching the solution without punishing those we have affected will only end the condition.