“Marley, my 6-month-old Corgi, came to us at 8 weeks old with food aggression issues. He guards everything. He guards his water dish, food, toys, everything. This morning he got a bath and we let him keep the towel he was dried off with to lay on. He was guarding the towel and when I reached down to pat him and he bit me. I went to catch hold of him to remove the towel and he went into a snarling, snapping frenzy. My son helped me get hold of him without getting chewed to bits. He continued to snarl and snap at me until my son had to leave for work.

For the food aggression, we varied where and when he was fed. We made him sit before we gave him his bowl. It really hasn't made a dent in his behavior. We are going to hand feeding him his food to see if that helps.

We have no plans of getting rid of this dog or doing anything unpleasant to him. This is the same puppy who comes bouncing to the door to see me and licks my hands and feet. He's smart, funny and most of the time he's a pleasure to be around. So far we have taken up everything that belongs to him. He's on a leash by my side. Any ideas would be helpful.”

It isn't uncommon for puppies to establish resource guarding at 8 weeks of age. In my observations, it stems from leaving pups with their mother long after she is ready for them to move on. 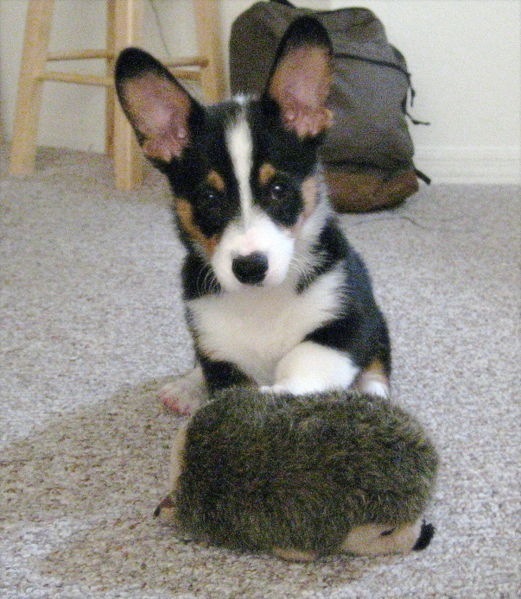 At 5 weeks of age, when puppies go next to the mother’s bowl while she is eating, she will growl. This is part of the weaning stage. When the puppies latch on to the mother’s teats they have teeth. This is painful so the mom growls to push them off or mouths them. All of this causes an anxiety in puppies because the very mom who is supposed to protect is now somewhat threatening. Note: this does not happen in wolves, since mothers will continue to feed their cubs to ensure their survival. The domestication of dogs has removed this survival instinct and therefore mother dogs get tired of their puppies and push them out.

At 8 weeks, when the pups are eating in the same pen, and in the same bowl, it becomes a food free-for-all and the strongest, most aggressive puppy gets the most food. I have seen puppies lay on a bowl of food and growl at their litter mates to keep them away. This is also the simulation of young pressured dominance. In the dog world, or animal world in general, this is how the puppies establish their hierarchy amongst themselves. Problem is these young pups have to fit in the human world and this behavior becomes unacceptable. Proper managed weaning and feeding is the key to averting this type of behavior, however that is a long, complex topic.

When the puppy comes home we tend to lavish it with love and affection, give it what it wants, try to gage what it should and shouldn’t get and when to get it. Timing is very important and it all depends on the emotional state the dog.

I will give you a typical scenario.  Many people put their hands in a dog’s food bowl. (I can never understand this.) Many times a puppy accepts it, however this is where the resource guarding comes in. I will put this bug in everyone’s mind; you just get your food after waiting for your favorite meal in a gourmet restaurant. As you wait, you are anxious and your impatience increases. Once you get your food, one of your dining buddies, without asking, sticks their fork in your plate and tries to take some. A typical reaction would be “hey, what are you doing? I haven’t even tasted it yet. Besides, you have your own food.” With that thought, just think how many times a dog has to go through this and have to accept it, even when it’s their owners, children in the house, other dogs or even the cat.

In order to avert any form of resource guarding, the timing of reward, timing of trade off, and timing of touching is crucial. When a dog is about to be fed, hold the bowl and walk around the house with it. Stop at certain points, wait for him to sit on his own. If he jumps up say nothing, don’t push or knee him off, just wait for him to calm. Continue this for a minute or two then give him his bowl of food. He will growl, stay there and say nothing (don’t watch or stare, just be with him.) Do this for about 2 weeks. Then after the second week is out, put a leash on him. Wait for the dog to finish 3/4 of his bowl. Call him to you, pull him away gently but firmly if you have to, for doing so hand him a treat. (This is a trade off ). Hold his lead, wait for him to calm down as he may be pulling to get back to his bowl. Do not correct him or say anything. When he turns and looks at you, then let him go to his bowl and let him finish it in peace. When he is finished, call him to you, take him out for a 15 minute  break and then put him in his crate. Close the door, give him about 1 to 2 hours to think it through and then out for a walk.

As far as wiping his feet goes, try just putting a towel on the ground and letting him stand on it for now, then crate him and let him out when his feet are dry. This is not a cure but a compromise. Right now your goal is to get him to relax.

When dealing with behavior issues, we must address each individual issue separately instead of all of them together at once. That can be overwhelming to the dog and can cause further complications. Behavior problems that arise are just the end result of how a dog reacting to its master based on a long progression of the dog feeling he has no other choice. As hard as it may be, we must look at our own behaviors that spark these issues. After all, the dog is only responding to us, negative or positive.

There are multiple types of “resource guarding” and my remedy to all of them wouldn’t fit on this page. However, my ‘Whelping Box Theory” will guide dog owners through rehabilitating a dog not only from aggression or shyness, but it will also cover all aspects of bad canine behavior, including resource guarding. The Theory is a starting point for all dogs and dog owners. I am in the middle of writing my book on the theory and all of these issues will be addressed there. It should be out sometime this year. In the meantime, I would highly suggest attending one of my seminars as this gives an overview to the theory and can quickly get you on the right track.