Many people try to categorize living things in some psychological sense, and dogs are not exempt from this. The only excuse I can find for this need for categorization is because society does this to relieve the burden in some subliminal sense of our own misgivings. I myself have done this in some form or another with other issues I have dealt with in my life. When we don't have enough skill or understanding, in this case of solving a dog’s problems, a categorization is used on the genetic sense to ease the guilty burden of these failures and tends to warrant the euthanasia excuse for convenience purposes. Some examples are shy, feral, aggressive, compulsive, a dog’s birth or breed heritage.

In some Northern Native Reservations dogs have been allowed to run free and breed on their own. I have seen this in New Mexico on one of my trips in 2003. Most people call stray dogs “feral dogs.” Where did this feral dog come from? It could have been let go by some human who failed with its care, training and affection. This Feral Dog acts wild based on being set free and having to survive for quite some time on its own. A puppy from these dogs could be called wild or feral, yet genetically speaking this puppy was from two former domesticated dogs.

No dog is feral by nature, not even dogs in Puerto Rico or Brazil...these dogs run the streets following humans for food and maybe some affection. Individuals who adopt these animals have quite a bit of success domesticating them again. In Asian countries where these dogs go into avoidance (similar to wolves as a primitive survival instinct) it is only because they are being hunted and eradicated for either nuisance removal or food. This brings out the primitive survival instinct of shyness, a trait similar to that of  wolves or coyotes.

If we look at wolves, they basically do make good pets in the hands of experienced people and are incredibly devoted to that person. Not that I condone keeping wolves as pets, this is just an example based on my experiences. If we look at hybrids wolves (half wolf, half dog), two things happen. You can take two litter-mates and raise them individually with 2 persons. One will be raised by the person who understands and the other raised by one who may not understand. In the end, the one that is raised with the understanding person will show more dog-like traits, and the one raised by the hand of the inexperienced person who dwells on the genetics of “half wolf, half dog” will see this type of unpredictable crossover temperament surface. This is also displayed, for example, by two puppies who are litter-mates of domestic dogs.

The difference between good and bad behavior depends on what form of leadership or dominance is achieved. Our dogs will go into primitive survival instinct if we use forced submissive dominance or acceptance, which is human interpretation of what they think wolves do, as opposed to dominant, benevolent, instinct, based on animal characteristics. If we are apologetic, accommodating, worrisome, fearful, or angry and corrective, our dogs will behave like us accordingly, based on the need to govern and they really don't want to. After all, someone has to “drive this ship.”

No dog is born shy, feral, aggressive, hyper or anxious. In my book, this falls on the interruption of human governing and misunderstanding. The only genetic aspect is the sensitivity to the leadership with the outcome of these issues verses catering to the sensitivity and working with limits and virtues to enable the dog to be strong and confident. When the aspect of this sensitivity is not understood or acknowledged, then depending on the confidence level of the temperament, a dog will go into his primitive instinct of survival. Shy and fearful for soft temperament, fear aggressive and unpredictable of medium temperament, and outright dominant or aggressive for confidant temperament. (Here goes my categorization again!) This survival becomes a result of the alienation a dog feels because by genetics, if a dog is made to work with humans, it must be able to trust humans in the relationship sense and therefore this trust breeds functionality.

We will talk about Skye, a dog I dealt with a few years ago. Skye was a shy dog who the owner felt was either abused or it was born shy in nature. This dog was at one of my previous seminars.

First I asked where did Skye come from. Of course she was born and bred in captivity; the domestic dog. Her parents weren't wolves or coyotes who are shy of humans. Chances are the dog was neglected, so what type of neglect are we talking about here? She was tied to a tree and made to deal with stimuli with no support. Her nature caused her to withdraw based on the vulnerable position she was put in and her sensitivity parameters.

Right away it could not be food, she is alive and in good physical health. Was she physically abused? No, you can pet her when she is next to you and doesn't cower (but she cowers and runs when she sees a strange human.) The true neglect comes from a misunderstanding previous owner who failed to see her sensitivity parameters and raised the dog with that failure. She is a soft dog and gentle or sensitive by nature. Much like an introverted human, this makes her not so forward and will hesitate at a young age to accepting things readily. Instead, if Skye was understood by this sensitivity and given the opportunity to absorb things as opposed to being forced to accept them, then Skye probably wouldn't be shy today.

This can be said with humans. Children who act shy just need time to adjust without force or immediate integration. You will find that, given some time according to their emotional sensitivity, the child will integrate and play just based on their time limits of the ability to include themselves at their own pace. In that process they rely on the parent for support to calm them and feel secure before they will go forward and feel secure out and abroad. These children will remain shy if pushed or coddled, they need to be supported and encouraged without any pressure. If they see the example by the parent who is not upset or discouraged by the child's behavior then the child will overcome its sensitivity issues. As well, dogs are very similar. Much like children with Autism, everything is black and white and there are no grey areas.

If we need to remove Skye's Feral Nature (shy), then we need to acknowledge her fearful limitations, analyze what and how past environments perpetuated the issue. Finally we must not act even remotely close to that of the human who raised her in the first place. Further we need to understand that in Skye's case she is not used to affection. A natural human emotion would be the idea of “let us make it all up to Skye by giving her tons of it” and then, at her stage of heightened anxiety and fear due to the transference, her behavior becomes more withdrawn because she is overwhelmed. The tie out to the tree and having to face things that approached her (be it animal or human) would be similar to the forced acceptance of over-affection and pushed socialization that many of us do to help a dog like Skye overcome her fears. This actually advocates the opposite.

In essence, socialization can have a huge adverse affect on dogs like Skye who are forced and pushed forward, this being dog to dog, dog to human, and dog to children. We end up not seeing the long-term effects based on a dogs sensitivity parameters and then use the categorizing genetic excuse once again when the result is negative. The other term for this is “mandated research” and “profile application.” Regardless of individual situations, inclusive of  schooled social ignorance, this is a common form of narcissistic existence in today’s social applications.

Many years ago I had a dog named Cheyenne (a wolf hybrid). This hybrid was an aggressive animal who displayed many characteristics of a cornered wolf or wild animal based on how he was raised previously. Genetically speaking he could be deemed as unpredictable. He would show affection like a dog in one sense but once pressured by affection or stimuli, act like an aggressive animal defending himself. He was chained to a tree, and after being tormented by some people one day, he broke loose, stalked, hunted, and attacked them.

This animal ended up in my possession at 3 years old. He had never been in the house, and certainly didn’t receive any real affection or guidance. By understanding him, knowing his limits and virtues and working within those levels of sensitivity, he ended up being my house pet from the age of 5 years old to his passing at 17 years of age. Guest would come over for dinner, watch television, etc and the old boy did not attack anyone. He even lived in the home with my male Rottweiler. The process was long and tedious. Success was achieved simply because the genetic excuse was not used. Instead, we were aware of his environment in his previous life, worked with that issue as a beginning, and allowed him to work with us without any socialization or affectionate pressure. Had I focused on genetics like his previous owner, said he is part wolf and that is why he behaves that way...well most likely Cheyenne would have expired at the young age of 3 years old.

This animal ended up in my possession at 3 years old. He had never been in the house, and certainly didn’t receive any real affection or guidance. By understanding him, knowing his limits and virtues and working within those levels of sensitivity, he ended up being my house pet from the age of 5 years old to his passing at 17 years of age. Guest would come over for dinner, watch television, etc and the old boy did not attack anyone. He even lived in the home with my male Rottweiler. The process was long and tedious. Success was achieved simply because the genetic excuse was not used. Instead, we were aware of his environment in his previous life, worked with that issue as a beginning, and allowed him to work with us without any socialization or affectionate pressure. Had I focused on genetics like his previous owner, said he is part wolf and that is why he behaves that way...well most likely Cheyenne would have expired at the young age of 3 years old.

Let no person expect positive responses with our own categorizing misunderstandings 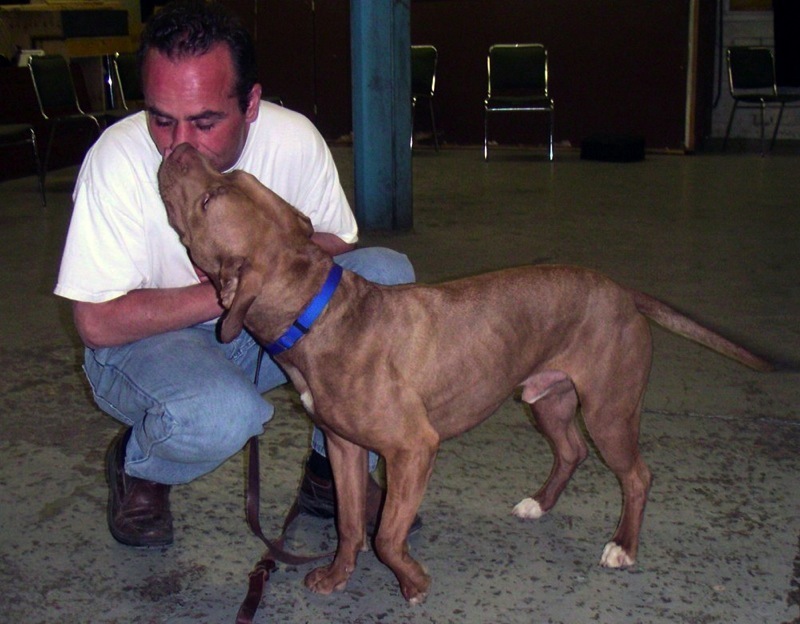 The above picture is a Pit Bull named Cody who used to suffer from aggression. Cody (or “BooBoo” as I affectionately called him) shows signs that he was used as a “Bait Dog” for dog fighting. His foster mom, Monika, worked with him for a year and a half, at which point he was fully trained off lead around people, children, and other dogs. Monika trained Cody to return to her and sit by her side when he was uncertain with surrounding stimuli. Sadly, Cody was diagnosed with cancer in 2007 and passed away October at almost 3 years of age. He is sorely missed, but our whole group feels extremely proud that Monika was able to give him freedom before he left this world. No regrets.