As told by his owner, Glenice from Newmarket, Ontario.
Back to Success Stories

I am writing this letter to try and express the feelings of pride, joy, and accomplishment that Sam and his training methods have given me. 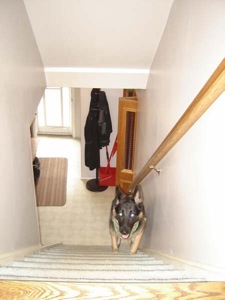 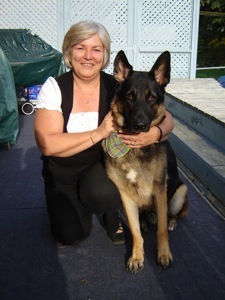 The Need For Dog Training a Fearful Dog

I am the owner of a very large, very strong, 18-month-old German shepherd named Apollo.  When Apollo was 6 months he was diagnosed with third degree hip dysplasia. He never complained about pain, but he did have a hard time coping with the flight of stairs. As he got older and was able to have his surgery he had adapted to a way of going up and down stairs which was awkward but worked for him. Unfortunately, Apollo had a couple of spills on the stairs because of the way he climbed them, and ended up too terrified to go up. I was at a loss as to what to do because he had to use stairs to go outside and relieve himself, and I could not carry a 120-pound dog anywhere.

I started looking for help in re-training Apollo to get him over his fear and to develop a more normal climb for him than what he had been doing. Enter Sam Malatesta, who had been referred to me by a local German shepherd kennel.

I spoke with Sam on the phone first, and after only a few minutes of talking with him I knew that I had made the right contact. My husband and I took Apollo to meet with him one week later. Sam wanted to see how Apollo was physically, and to evaluate his behavior. He then came over to our home and proceeded to show me how to help Apollo get over his fear and climb in a methodical, controlled manner. I worked with him every day doing exactly as I had been shown and it was no time at all before Apollo was calm and controlled on the stairs which in turn would help him not to put strain on his hips and cause more pain.

I was so impressed with Sam and his easy way with training, that I was like a sponge and he was the fountain of knowledge. I wanted to soak up as much of that training as was possible. I asked Sam to help me become a pet owner that can walk with my dog confidently off leash, in whatever surroundings, noises, or distractions and not fear that he would run off or misbehave. I craved that bond of trust and teamwork between Apollo and myself that I knew we could have if we were taught how. 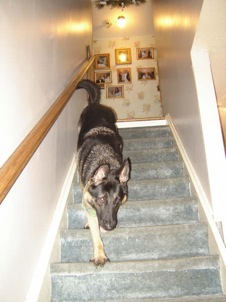 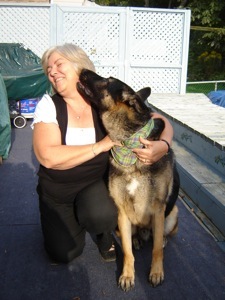 When I explained to Sam what I wanted, he gave me his famous quote: “Your dog will look at you when you are worth looking at,” and proceeded to teach me how to achieve that goal.

The Results of Dog Training

Since that time, we have been through 4 hours of therapy dog testing with 4 other dogs. There was only one that passed to become a certified “Therapy Dog”, and that was Apollo.

I can not possibly put into words how it feels to walk down a busy main street with cars, people, dogs, bicycles etc. going by and my dog is off leash by my side, and all he is doing is “looking at me.”