As told by his owner, Betty from Alliston, Ontario.
Back to Success Stories

The Need for Dog Training

I had always wanted a dog after retiring. I decided it was time I could get one and be home with it to train properly. I decided on a Golden Retriever as I had know some and they were very gentle dogs. Well, of course there is an exception to every rule. I ended up with an aggressive one. 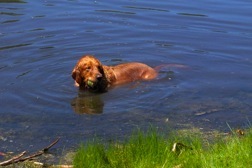 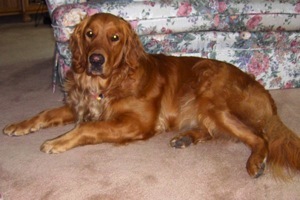 The Quest for Finding An Effective Dog Training Program

We went through basic training at the pet store which was okay, Copper did good. He had been aggressive with his food so we worked with him for months, first hand feeding him then feeding him from a bowl. As soon as we put the bowl on the floor, he would guard it and snarl at us till we went away. We could not go by him or be in the same room with him while he was eating so we left him alone. Being that he was only a puppy, we thought he would grow out of it, but of course he did not.

When he was full-grown, he started growling at us and he did not want us to touch him, which concerned me. We have grandchildren that liked to play with him and also dog sit for me. We were scared he would bite someone so I phoned around to find a trainer to help me, but had no luck finding one. Then I saw an advertisement on TV for a franchised training company which gave guaranteed lifetime results. It may possibly work on some things, but definitely not aggression. We had them come over and show us their method which involved throwing these green bags at him, which had pieces of chain inside. Well, this made him worse and he became a very frightened dog. He would not come to us, and when he finally did, he would be very afraid. We stopped doing this and went back to letting him eat alone and making sure nobody was around him. 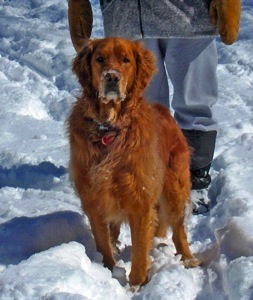 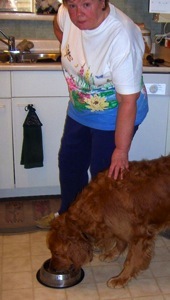 Then one day I saw an advertisement for a dog seminar which included dog aggression. I found out who was doing the seminar and I gave them a call. Sam came to the house for a private consultation. He checked Copper out, who he could read right away. He showed us how to watch him and see when he was going to turn. Sam told us to come to his seminar. It was a two-day event which covered so many things. We watched Sam with his dogs and how well trained they were and thought “if only Copper could be like them.” We were so impressed by Sam and his method, we booked private lessons with him as now Copper was getting aggressive with other dogs as well.

We have been working with Sam now for 6 months and Copper is a very different dog. We are still working on his food aggression which has come a long way. We can stand beside him and touch his back while he is eating now.

Sam's Method really works and Copper is a happier and better behaved dog. We would recommend Sam and his method to anyone with a dog. He understands their thinking. Sam will set up a program that is 100% safe and effective for both you and your dog.