As told by his owner, Kathy from Columbus, Ohio.
Back to Success Stories

The Need for Dog Training

Mocha should have been put down. I adopted him after he had spent 2 years in 2 dog shelters and 6 months in the outdoor kennel of a foster home. I had grown up with dogs but none of my experience had prepared me for the 61⁄2 year old monster I had welcomed into my home in the Spring of 2004. After that first week, I was afraid he was going to hurt someone, including me. 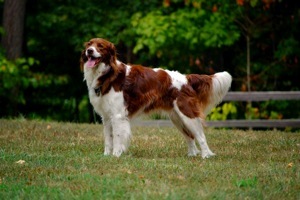 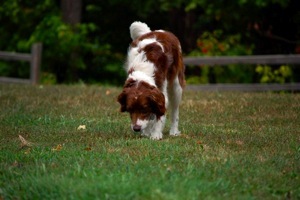 Within a few days of our introduction, it was apparent that Mocha was used to getting his way via physical intimidation. If I did anything he didn’t like or made him do something he didn’t want to do, he would snarl and snap at me. He would also jump up against me and grab my clothes, sometimes bruising me in the process.  When guests came over he would try to hump me or them or both.  Within that first week, he determined that I belonged to him and immediately set out to shape me to his will. I can’t recount how many times I laid across him, pinning him to the floor, so he couldn’t bite me when he started to “rough me up” over something innocuous.

For example, Mocha would stand between me and the garage door, barring my way when I would leave to go to work in the morning.  He would snarl, growl and snap at my hand when I would grab his collar to move him out of the way. The rescue from whom I adopted him told me that he was “collar sensitive” and I was handling him incorrectly. I tested their theory: Instead of touching his collar, I experimented with various ways of bodily moving him and even avoided touching him altogether by pulling on the rug upon which he sat… Needless to say, I received the exact same response no matter what I tried. This proved to me that the issue was Mocha’s will, not some reactive behavior resulting from past abuse. 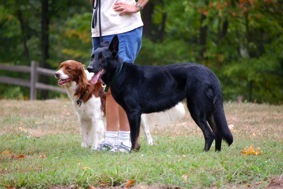 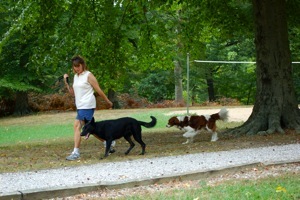 Not willing to give up, I enrolled Mocha in 2 successive obedience classes where he out-performed all of the other dogs. “Performed” was the operative word, of course. Mocha loved to “strut his stuff” but it was something he turned off and on at his convenience. As wonderful as he was in front of an audience, at home he would decide whether or not he wanted to respond to the commands he was given.

By October, I was crying myself to sleep at least one night a week.  I had adopted Mocha with the expectation that a dog would bring joy and companionship to my life. Instead, he turned my home into a war zone where every exchange was a battle of wills. I was not ready to give up but I had exhausted all of the resources available to me and had tried all of the training techniques out there without a glimmer of success. I called the rescue and told them that I was still willing to work with Mocha but I needed someone who could address his emotional and mental issues. Barring that, they would need to take him back.

That was the first time I heard Sam Malatesta’s name. He was described as a “trainer who was able to rehabilitate un-rehabilitatable dogs.” I signed up for his weekend seminar at the end of November and started applying what I had learned as soon as I got home. Results came quickly: Within one month of our return, I no longer needed to tie Mocha up or leash him in the yard.  Within two months, I did not even need to be outside with him and Mocha would stay in the yard.

The Results of Dog Training

Mocha is a very smart dog. He is also a very intense and demanding dog. That hasn’t changed. What Sam’s training did for us was build a trust relationship without gimmicks or harsh treatment (forced submission) of any kind. Once Mocha started TRUSTING me, he also started to choose to please me by responding to my commands.

Today, he is my constant companion and source of joy. He travels everywhere with me off-leash. I don’t worry about how he will behave with other animals or people and know he will respond when commanded. Our trust in each other allows him to be free… and his freedom has made this journey all worthwhile. I hope everyone who reads this has a Mocha in their lives and can experience the sheer beauty of watching their dog chase bunny trails in a field, knowing their canine buddy will recall when it is time to go home, tired and content. If not, I encourage them to work with Sam so they, too, can experience the wonderful & rewarding canine-human bond at its full potential.